Every overseas Singaporean has the same fear: that when we return, we will not know our way home.

Our city builds and tears down much quicker than most other places. Nothing is safe. The price of progress: everyone’s memories. No time for nostalgia, or poetry, when we can have… growth.

When I move between worlds, my words and ideas shift.

Nothing ever stays the same. 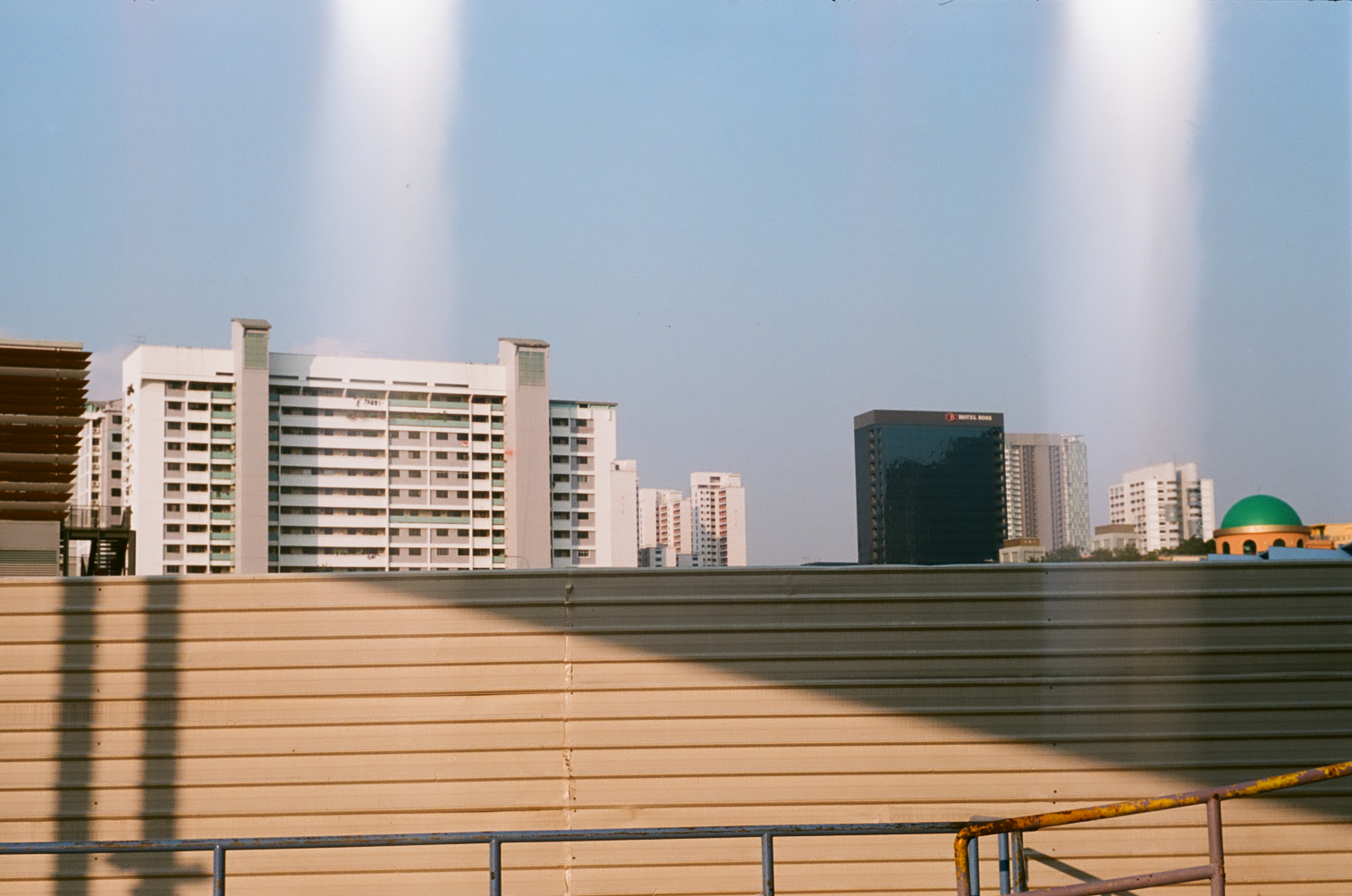 When we return, there are more towers of glass and steel. Like our displaced accents when abroad, moving between Singlish and that of wherever-the-hell-we-live, our country’s buildings now look like they want to be a little bit of everything.

I hate those buildings. I hate that waterfall in the airport, I hate the infinity pool on the top of the world, I hate the overwrought fake plastic trees and every single thing in a tourism board glamor shot. Glamour shot.

Instead, I take long walks along the old civic district. There, old buildings, colonial and brutalist, form my happy path. In a way, I love this part of town because it changes, but it stays the same. Hours of riding on the top level of the meandering bus to the ends of the island and back, sometimes ending in a boat ride to an island or more frequently, noodles.

3 A.M. staggers between hostel and Mustafa, my tummy filled with warm naan, kadai chicken and Punjabi uncles giving me lesbian dating advice (Their advice was usually some variation of “always pick the Indian girl”).

Wandering every story (floor) of Sim Lim Tower, looking at batteries, wires, cables. My grandfather worked at a dry goods market that is now a nearby field, probably slated for a new apartment (condo) or hotel.

Memories are a leaky, unprofitable thing. 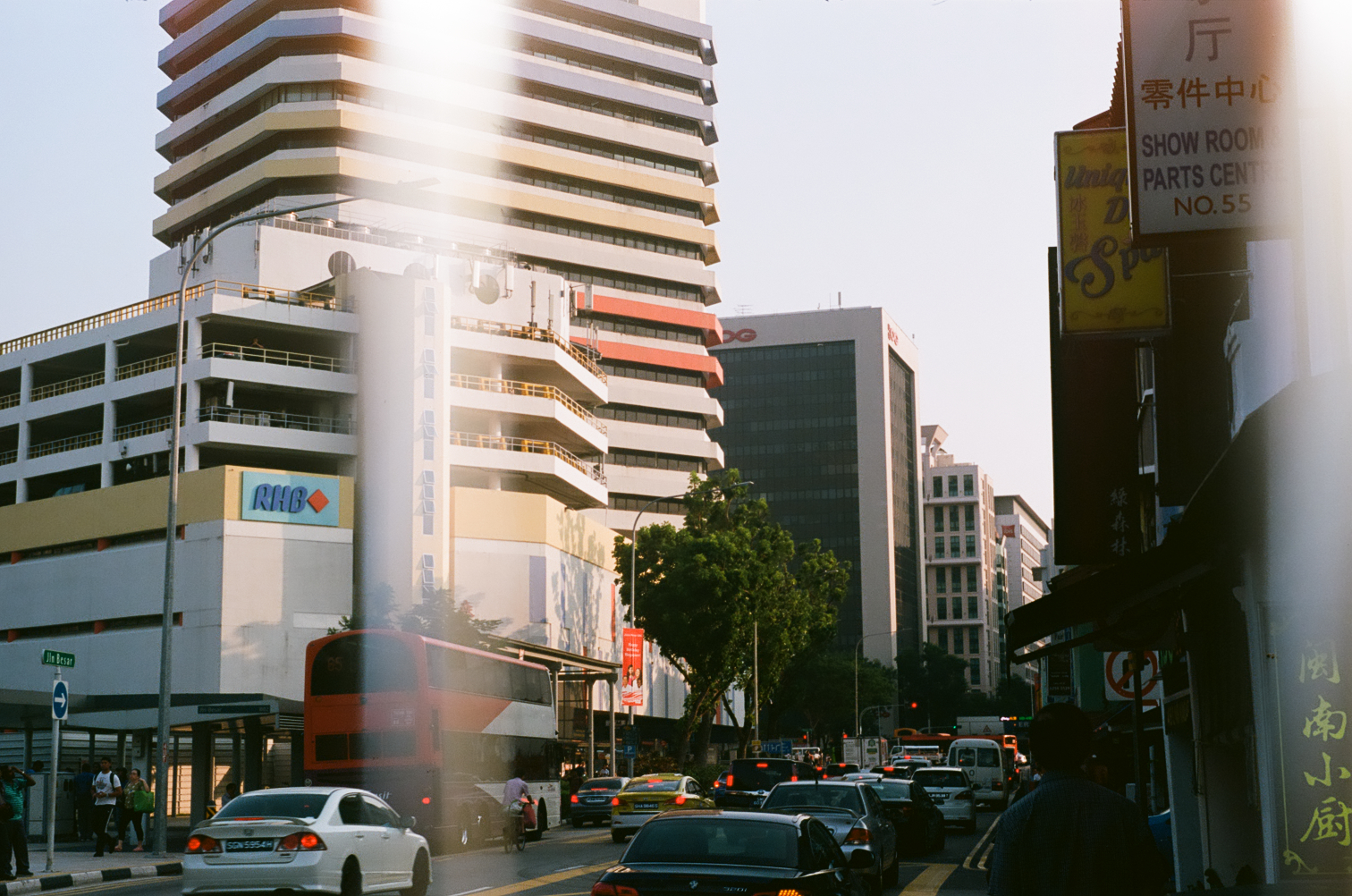 How did I go from a small city to an even smaller one? I’m living car-less in a pandemic (I don’t drive, because, I’ve always had transit), in a seven by seven mile city. So many things are happening in the world, but this country feels… like a lot.

For now, we’re strapped in and waiting with bated breath to see what’s in store for the next couple of months. As I write this, there’s a man furiously banging on cars and cars driving badly and there’s another man yelling stupid bitch at the top of his voice at an imaginary person, but they don’t scare me as much as the politicians.

We take long walks in every direction.

To to west, we walk by recently gentrified Hayes Valley, with murals and giant babies.

To the east, we sometimes stock up on Asian snacks and all the Indomie we need from Pang Kee in Chinatown. To the north, a range of outdoorsy options. Chrissy Fields, where you’ll eventually see the Golden Gate Bridge; the municipal pier, where I’ve been known to sprint up and down when I feel like I need to run very fast for no reason at all. 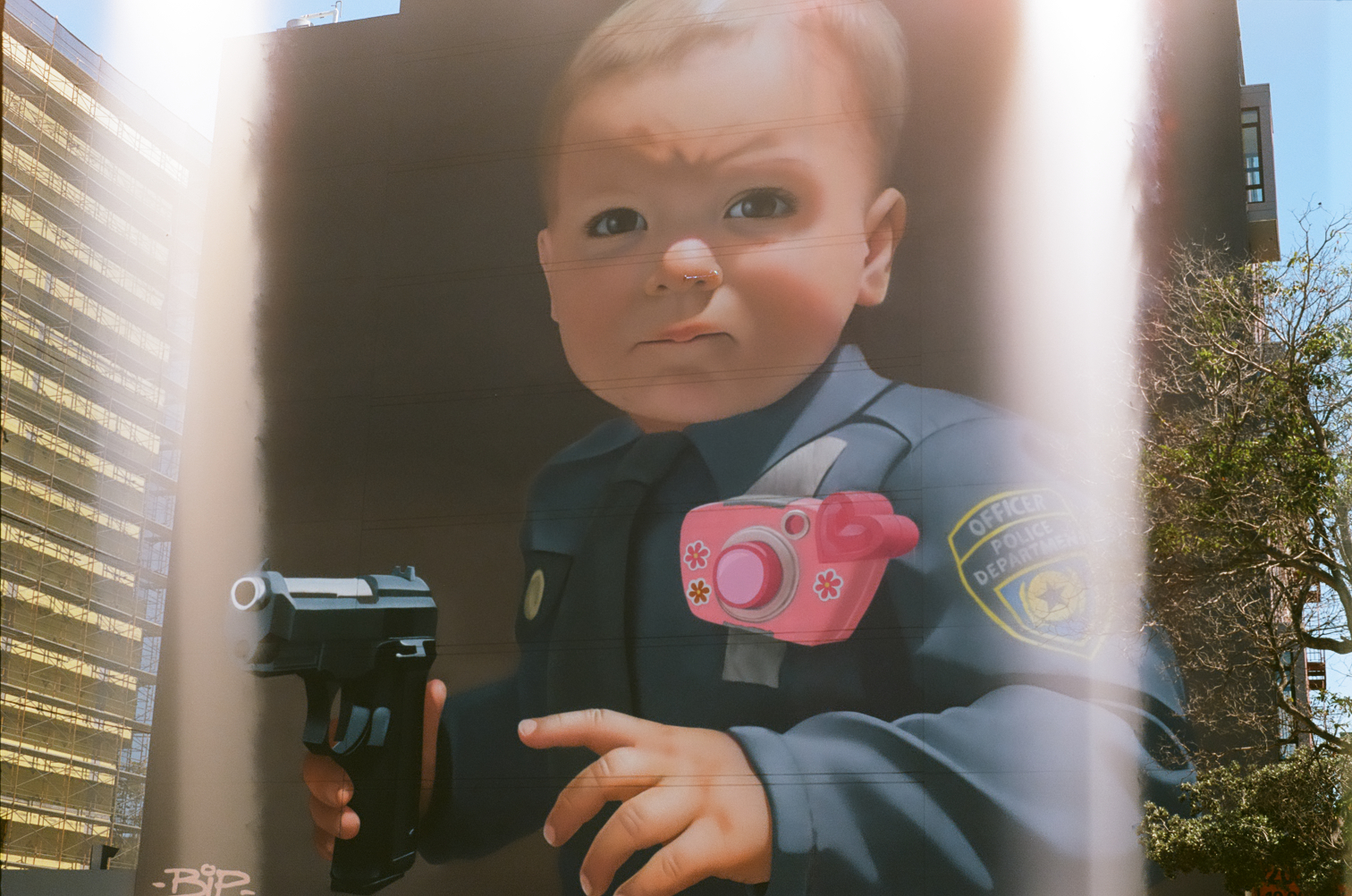 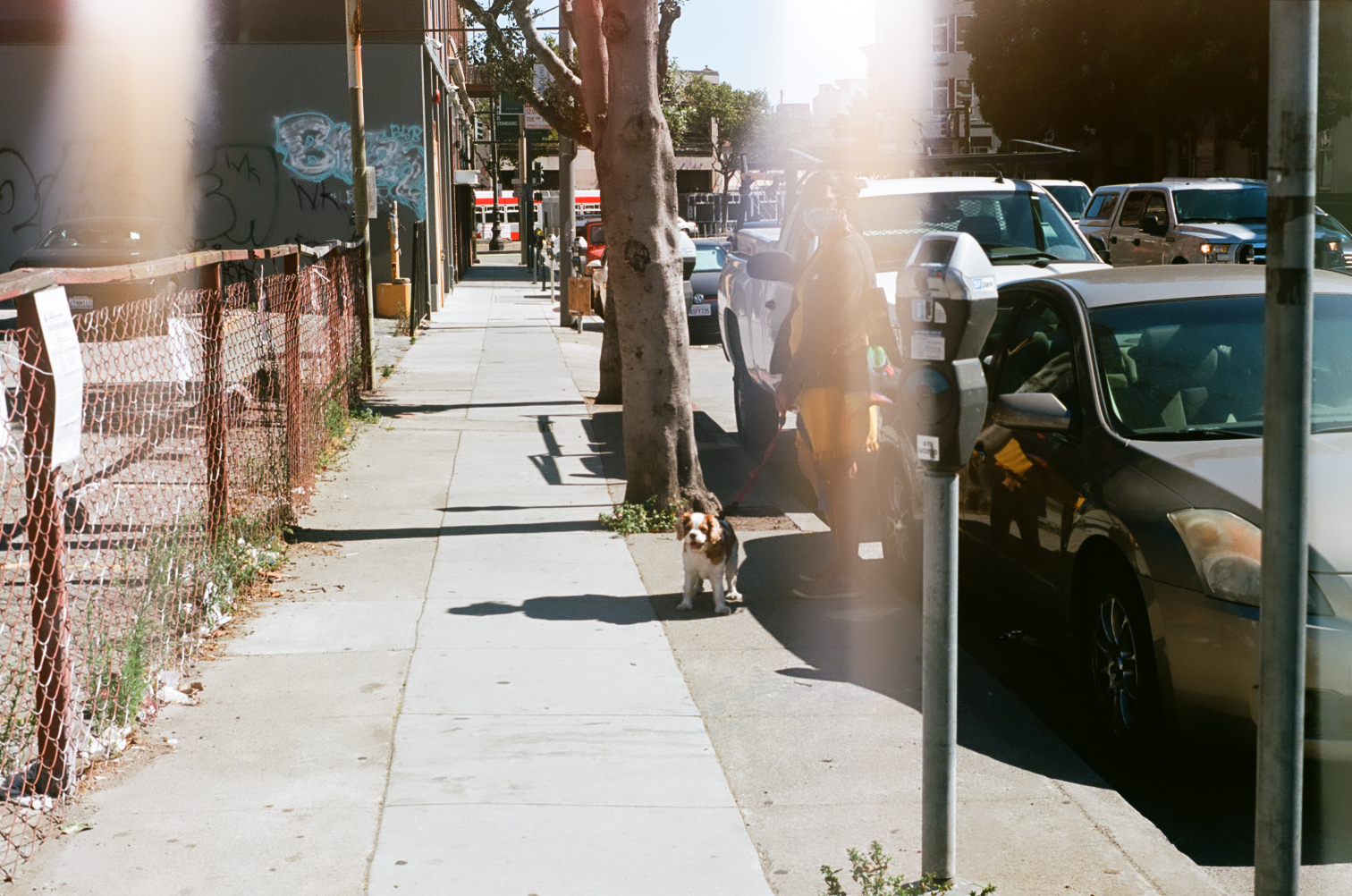 Hayes Valley, San Francisco. 2020. Dog and wife waiting for me to be done taking photos with a manual camera.

Unlike where I’m from, this home of mine barely changes. We recently watched footage of Charles Manson’s San Francisco days and… so much of the city is the same. The gurus have left Golden Gate Park, and they’ve moved online to become productivity deities who preach the gospel of four hour work weeks and cryptocurrency.

It’s going to be okay. 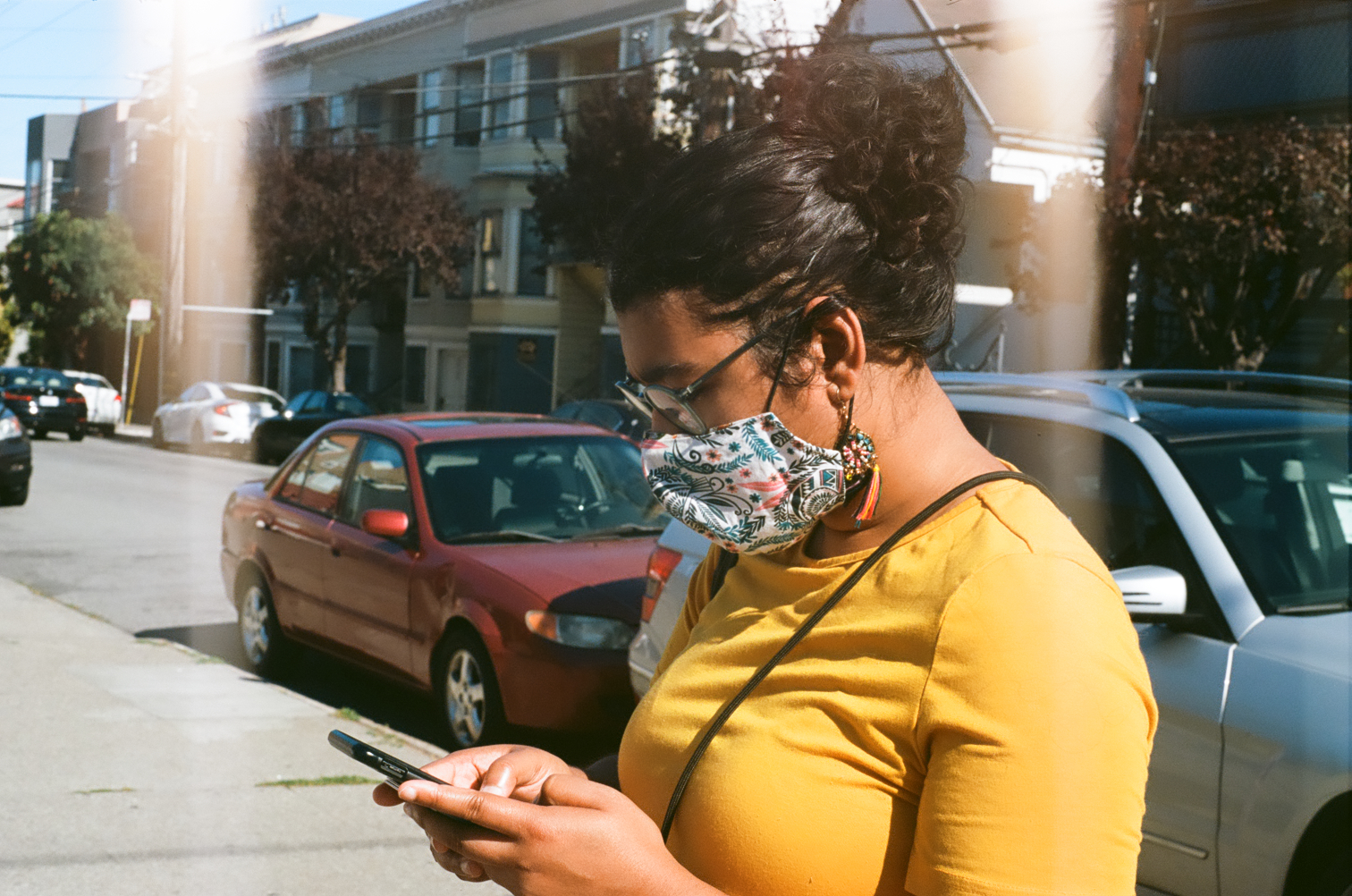 Hayes Valley, San Francisco. 2020. Wife in yellow dress waiting for me to be done tweaking my camera settings.

May the next roll of the film not leak light. And this country not go completely to the dogs.